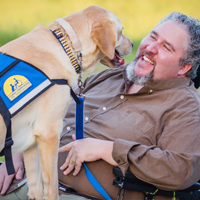 Chris Newbern, an extraordinary Canine Companions® volunteer in Texas has had a significant and measurable impact in the South Central Region.

Chris recognized a community need and started the Gulf Coast Chapter in July 2018 after receiving Service Dog Powers in May 2018. For over 2 years, the Gulf Coast Chapter has made positive change under Chris’ leadership. Chris is a tireless advocate for Canine Companions and has helped to lay the groundwork for multiple events and fundraising opportunities. He raised more than $25,000 by giving a presentation to the Peanuts Collector Club of America.

Chris has built strong partnerships with over 70 organizations, including hospital systems and veterans’ organizations. Chris also spearheaded the Virtual Veteran’s Event 2020 for the South Central Region – a virtual fall event that will bring together organizations that serve veterans from across the state of Texas and educate them on Canine Companions, the range of disabilities we cover for veterans and how to apply for a service dog for their clients. While doing this he has attended and represented Canine Companions at over 25 events. Chris has also given several presentations to organizations on service dog fraud and even participated in a recent nationwide study being conducted about service dog fraud and the impact on individuals with disabilities.

As a stellar Gulf Coast Chapter president, Chris has developed two leadership teams in two years after changes in leadership occurred. He has built an email list of over 250 individuals who either want a service dog or want to volunteer and he has not stopped. His enthusiasm and energy are contagious for all the Canine Companions team as Chris works to find new ways to bring our organization to the top. Chris has also been dedicated to bringing the Houston Canine Companions supporters together in a more active way. At the beginning of the year, Chris hosted a wine-tasting get-together for the volunteers in the area to get to know each other a little better.

In addition to his work as chapter president and the catalyst for our fall veterans’ event, Chris has been one of the most vocal advocates for Canine Companions in the South Central Region. Whether representing Canine Companions at the Houston Abilities Expo, cold-calling various hospitals, advocacy centers and veterans homes throughout the state of Texas or taking the time to speak with anyone who is interested in what his dog Powers can do for him, Chris is always striving to advance the visibility and mission of Canine Companions. Through all of this work his most beloved achievements have come when helping people get a dog. He has supported two individuals through the process who have now received dogs and three others who are on the waitlist.

Chris is a tireless champion for our organization and for much of the last two years has been the backbone of our Gulf Coast community.