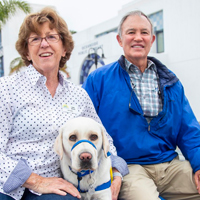 Carol and Read Miller have been supporters of Canine Companions® for over 10 years. Carol’s relationship with Canine Companions began when she was asked by a fellow volunteer, Marilyn Mikes to accompany her to bathe dogs on campus.

Occasionally when Marilyn was out of town, she would ask Carol to take her place and so her love affair with Canine Companions began. Overtime, she became a full-time dog bather and the rest was history. In addition to bathing the dogs, Carol also cares for the puppies in the puppy pen when they arrive from the airport after their long journey from Santa Rosa. Carol and Read also foster the puppies being raised in Miramar Brig. As a puppy raiser, Carol is currently raising her 3rd dog, Kimba who is 8 months old.

Over the years, Carol has helped the program department with temperament testing for the dogs entering first semester training. Her role was to drag a chain over the metal racks to create a loud noise to test the dog’s reaction to the sound. Like clockwork, the week after graduation, Carol would volunteer for this important task.

Among the many contributions that Carol and Read have made to the Southwest region, by far their introduction and recommendation to the North Coast Church in Vista, California as a graduation venue was one of the most significant.

The meeting facilities are not open to the public and therefore this was quite an exception. After the first graduation, the North Coast Church welcomed us back with open arms and we now have a permanent venue for graduation. With Carol’s introduction to North Coast Church, the Southwest Region saves over $6500 a year in rental costs because North Coast Church does not charge Canine Companions for their use of the space. Most importantly, through Carol and Read’s recommendation and support, we can proudly host graduation ceremonies at a location that is best suited to our mission and positively reflects our organization to the community.