Home » News » This service dog has a nose for healing

This service dog has a nose for healing 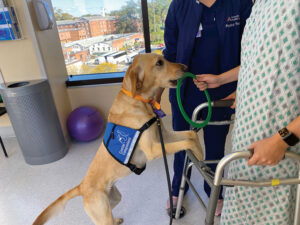 It was a dog that landed Peggy Smith in the hospital with extensive injuries and another dog that helped her recover enough to go home.

Late one night in May 2021, Smith was taking her 7-year-old Plott hound outside on a retractable leash when the dog unexpectedly lunged for something. The 76-year-old University Park resident flew down two steps and landed in her backyard. After nearly two weeks in a hospital recovering from a head injury, a cracked collarbone and broken ribs, she moved to Adventist HealthCare Rehabilitation in Takoma Park for two weeks of inpatient therapy. There, she was paired with Peru, a golden retriever that she says provided encouragement—and a needed distraction—as she regained her strength.

The service-trained facility dog was at Smith’s side as she pushed through pain and built up her endurance with a walker. The simple task of brushing Peru’s coat was an especially effective part of her therapy, she says. “There was a psychological component to it that focused me on [Peru] instead of on what I was experiencing—something that wouldn’t have happened, say, with a pulley,” Smith says. “I did not even realize I was doing a full 180 [degree] movement one side to the other. …It was a turning point in my recovery, I’m sure of it.”

Peru, who joined the team at Adventist in September 2020, works in 30-minute sessions with physical, occupational, speech and recreation therapists. Before working with patients, she underwent more than two years of training through Canine Companions, a U.S.-based nonprofit. The 3-year-old dog knows 51 commands and can turn on lights, close drawers and pick up keys, among other activities, using her nose, mouth and paw

Unlike a therapy dog whose job is to provide comfort, Peru is a working dog involved in patients’ treatment and rehab goals. She can kick a soccer ball, retrieve rings in a tossing game or tap a balloon back and forth with a patient, says Heather Tropiano, a rehabilitation psychologist and Peru’s handler at the Adventist rehab unit, which moved to Adventist HealthCare White Oak Medical Center in Silver Spring in December.

“A lot of the things we do in rehab we have to do stealthily in a way that sometimes patients aren’t aware of because there’s a lot of understandable fear,” Tropiano says. She is tracking Peru’s impact on patients’ performance and hopes to add to research showing that having a dog in a medical setting can help reduce a patient’s stress by lowering their blood pressure and heart rate.

Julie Robertson, a senior physical therapist at Adventist, says she’s been surprised how quickly patients have taken to Peru. She’s seen some who could only stand for 20 seconds suddenly be able to stand for three minutes while doing the same activity with the dog. She recalls one patient in her mid-30s who was in excruciating pain from a car accident and had trouble taking even a few steps. “I knew she was a big animal lover, so I decided to bring Peru into our session,” Robertson says. She placed the dog about 10 feet away and told the patient to walk toward her. “On the very first attempt, she ended up walking about 30 feet. Peru kept walking backward,” Robertson says. “Within three or four days, this patient was walking 150 feet like it was nothing.”

Many of Adventist’s patients like dogs and are eager to work with Peru, Tropiano says. “We assess whether or not Peru would be good to help with not only the physical goals, but with pain management or just facilitating engagement,” she says. “A lot of people experience depression and anxiety from the injuries that they’ve sustained, so she helps in that respect.”

For Peru, listening to commands and working with patients takes a lot of cognitive energy. Just like humans, she needs to take breaks, Tropiano says, noting that the dog enjoys Parmesan-chicken-cranberry treats as a reward. She works about two to three hours a day, napping in Tropiano’s office between therapy sessions and going home with her at night.

“She has just this love of learning. Whenever I try to teach her something new, you just see the wheels turning. And she wants to get it right,” Tropiano says. “[Peru] has been a big morale boost. …She brings a sense of home and a sense of family.”

*Please be aware that by clicking the link to the bethesdamagazine.com website you are visiting a site that is not managed by Canine Companions. Website security, accessibility and privacy policies may be different than Canine Companions policies. Please read their policies closely.