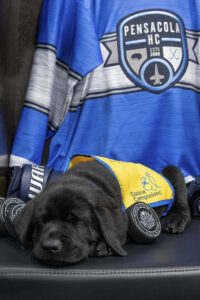 The Pensacola Ice Flyers announced they have a new addition to the organization by way of a puppy that is a future service dog through Canine Companions.

The puppy is named Ranger and is a black Labrador/Golden Retriever cross. He arrived in Pensacola and will be raised and socialized by long-time volunteer puppy raisers, Leanne Pickering and Weston Cramer. Ranger was already named when they were informed they would be receiving a new puppy to raise. It was a perfect name as Cramer is an Army Ranger who served from 2003 to 2008 with the 3rd Infantry Division and was deployed in 2005 for Operation Iraqi Freedom III with his operation being East Baghdad.

“As a volunteer puppy raiser, it is a rewarding experience with selfless service to raise a Canine Companions dog that can help adults, children, and veterans with disabilities,” Cramer said. “The partnership with the Ice Flyers will bring a greater awareness of Canine Companions to the Pensacola area and surrounding communities.”

*Please be aware that by clicking this link, you are visiting sites that are not managed by Canine Companions. Website security, accessibility and privacy policies may be different than Canine Companions policies. Please read their policies closely.