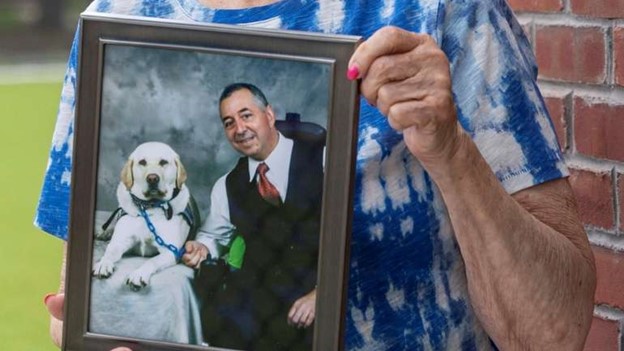 Those who knew Donald Barbieri, a former longtime New Hyde Park village trustee, knew he loved his family, the community and his service dog, Hallie, who was by his side during his last years battling multiple sclerosis.

Barbieri died in 2018 at age 58 after fighting the disease for more than 20 years, but officials will keep his memory alive with the unveiling of the village’s first dog park in honor of the lifelong resident and his Labrador.

“He was the greatest ambassador the Village of New Hyde Park has ever known,” said Mayor Chris Devane, who came up with the idea while visiting the site shortly after being elected last year.

Officials will open the Donald Barbieri Dog Park, on Lincoln Avenue at the village’s Memorial Park, and unveil a plaque at a ceremony Sunday morning. The dog park has two sections to separate larger breeds from smaller ones, and also has water stations.

Barbieri used a wheelchair, but Hallie was there to aid him daily with tasks such as picking up his cellphone when it fell, turning on lights and opening doors, said Barbieri’s mother, Audrey.

“They became one,” she said. “She was just a wonderful companion for him.”

Hallie, who joined the family in 2010, now lives in Michigan with one of Barbieri’s friends.

Audrey Barbieri, of New Hyde Park, who was one of the first people to see the plaque, said the tribute was “gorgeous” and fitting for her son and Hallie.

“I hope all the other dogs get to enjoy it,” she said of the park.

Craig Barbieri said his older brother was diagnosed with MS — a disease of the nervous system that impacts the brain and spinal cord — in his early 30s, but that even as his condition progressed, his positive attitude did not diminish.

“He was a shining light for a lot of people,” Craig Barbieri, a village resident, said. “He was very upbeat, positive and he had the type of personality that made people feel better around him.”

When Barbieri first ran for office in 2001, former Mayor Daniel Petruccio, who served the village for 12 years before opting not to seek reelection in 2013, was one of his running mates. Barbieri won, and Petruccio said that though he was in a wheelchair, Barbieri was the most mobile person on the board.

“In one respect, he had the most obstacles facing him, yet he was the hardest-working member of our team,” Petruccio said. “He was a remarkable man.”

Petruccio said the beautification of Jericho Turnpike and local parks were just a few of the projects that can be attributed to Barbieri. He recalled his friend’s persistence and creativity when obtaining state and federal funds for village projects.

“It was very difficult to say no to Donnie,” Petruccio said. “I think that was one of his great skills as a public servant. It was always his first instinct.”

Barbieri was also an advocate for the disabled, Canine Companions — which provides service dogs and has a training center in Medford —  and finding a cure for MS, his family said.

“To bond with an animal the way those two bonded was just an amazing thing to watch,” said Barbieri’s younger sister, Diane.

Daily Hours — Open seven days a week a from 9 a.m. till an hour before dusk