Canine Companions found a new and exciting way to support veterans this November with a little help from some of the most talented artists in rock and roll.

On Veterans Day weekend, program graduate and veteran Jay and Canine Companions service dog Flurry shared our mission to a sold-out crowd of roughly 15,000 people at Nationwide Arena in Columbus. 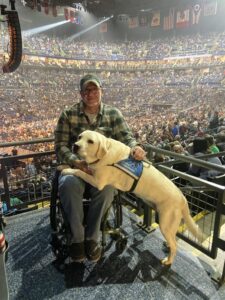 Jay and Flurry’s appearance was thanks to a partnership with VetsAid, a music festival hosted by Rockstar Joe Walsh and his son. Each year, VetsAid chooses to partner with non-profit organizations that align with its mission to provide ongoing support to our nation’s heroes.

The festival featured an array of successful bands, including Nine Inch Nails, The Black Keys, James Gang and The Breeders, with a special guest appearance from Dave Grohl.

It didn’t take much convincing to get Jay on board, he says. Jay had served 20 years in the US Army when his spine was fractured during an Airborne Operation. Over the following 12 years, Jay underwent more than nine surgeries that resulted in almost his entire spine being fused, limiting his mobility and causing chronic pain.

In the years since, Jay has received three service dogs from Canine Companions – but he says our organization’s services extend far beyond that.

Canine Companions has placed more than 400 service dogs with veterans since expanding our program in 2014 to serve veterans experiencing Post-Traumatic Stress Disorder (PTSD). A percentage of the VetsAid ticket sales will go to Canine Companions so we can continue to provide exceptional services to our clients.

You can learn more about our veterans initiative here.