Home » News » All Is Bright: A Service Dog Carries on Christmas Traditions

All Is Bright: A Service Dog Carries on Christmas Traditions 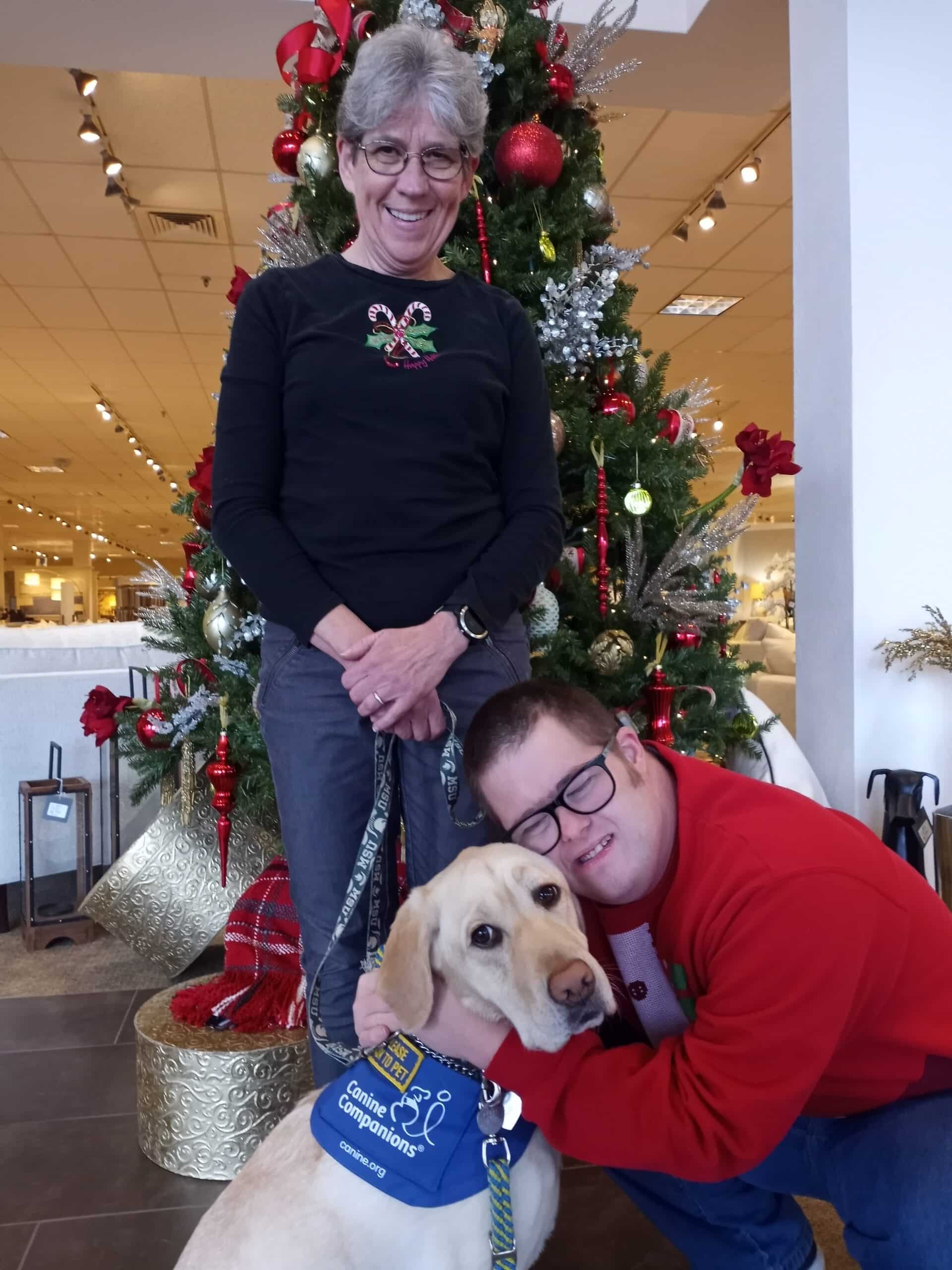 If Christmas is all about traditions – old and new—then one Midlothian man and his service dog will likely experience both this holiday season.

Isaac Schilling’s wish list is now complete, with yellow Labrador Winnie by his side to share in the festivities, continuing a nearly decade-old tradition of having a Canine Companions dog accompany him — not only to events such as special needs holiday parties – but throughout life itself.

Isaac, the youngest child of Anita and Timothy Schilling, has seen his older siblings grown up, move out, marry and host Christmas celebrations with families of their own.

His path is different.

Enter: Winnie, to expand his horizons.

With big paws to fill, Winnie is stepping in where Isaac’s first Canine Companions dog, Jody —  who passed away after nearly nine years of loyal service — left off.  While Winnie performs tasks such as pushing the handicap access button of an automatic door, and alerting Isaac when his special needs transportation van arrives, her true role is to provide a calming presence during flurries of activity. Winnie will be accompanying Isaac to upcoming holiday events such as a Special Olympics Christmas party and photos with Santa.

Anita explained that with Winnie by his side, her typically shy son finds the courage needed to engage in social moments which might be as simple as responding to a greeting from a stranger — or as serious as seeing his doctor.

“Winnie has been a blessing for Isaac,” said Anita, a special education teacher at Elizabeth Scott Elementary School in Chester, adding that Winnie goes to medical appointments “which reduces Isaac’s anxiety and helps him to be comfortable communicating with the doctor or the dentist.”

When in public, Winnie is required to wear a “double-leashed” harness, with one leash held by Isaac as the recipient and the other held by either Anita or Timothy, as the facilitator. “When we take Winnie somewhere, we must be three,” explained Anita, noting that if she were to go out alone with Winnie in her Canine Companion role, “we would be abusing the privilege of having a service dog.”

The Schillings first became aware of the Canine Companions organization through a friend whose son had Down Syndrome and was the recipient of a Canine Companions service dog.  Earlier this year, the Schillings began a months-long application process, which culminated in a rigorous two weeks of onsite training at the nonprofit’s facility in Long Island, New York.  Recalling the experience, Anita laughed, “I say to people, you know, the dog was well trained. They were training us.”

Debra Dougherty, Canine Companions’s Northeast Region Executive Director, said the dogs deliver life-changing assistance to veterans, autistic children and others with disabilities, noting that volunteers “see the impact that it makes on the recipients lives.”

Chesterfield County is apparently the hub of a tight-knit community of Canine Companions recipients and volunteers who often mingle in the same circles. One such volunteer is Jackie McCool, a Midlothian photographer (of humans and pets), who organizes the organization’s annual fund raiser Give a Dog a Job 5k.  Another is Bruce Alt, who along with his wife Chris, devotes 18 months of obedience training (per puppy) to socialize the dogs in public settings, including restaurants, banks, hospitals and even church.

Coincidentally, McCool and the Alts are parishioners of St. Edward the Confessor Catholic Church in Bon Air, and Isaac and Winnie often attend the church’s Sunday school program designed for adults with disabilities.

The Alts, who are currently training two future service dogs —  golden Retriever Dooley and black Labrador Adeline – typically take both every Sunday to the 11:15 a.m. Mass.  Sitting in their usual spot, the second pew from the back, Bruce joked, “We call it the Dog Pound.” Bruce said the dogs also make their weekly rounds to Johnston Willis Hospital, comforting patients there and have even provided grief relief at funerals. “When you begin to do this, you begin to see the hand of God is working. It just brings so much peace,” Bruce said.

Soon Dooley and Adeline will go to New York to complete their training, each eventually becoming a second set of ears, hands and legs for their human partners. Finally, they are gifted, free-of-charge to recipients such as Isaac, who the Alts know personally. But before “graduating from puppy college training” as Chris likes to describe it, the dogs will likely cross paths once more with the Schilling family.

They may even attend the Outreach of Love Sunday school Christmas party at St. Edward’s. That’s where Winnie and Isaac will be. It’s just one more of the many events on Isaac’s busy Christmas agenda.

“Isaac loves the holidays,” said Anita, who is scheduling activities, amidst her son’s normal routine which includes working part-time folding boxes at the Pizza Hut on Belmont Road in Chesterfield. He also attends day support for people with intellectual disabilities at a skills development center in Henrico County.

Anita said the Henrico facility is sponsoring a trip to Disney for its 25 clients and their families. Isaac visited Disney in the past with his former CC dog Jody, and now Winnie will be carrying on that tradition. “Isaac loves (seeing) the Princess,” said Anita. “I think having Winnie has greatly improved Isaac’s quality of life. He’s happy.”

Grinning at the thought of unwrapping the month of December and ringing in the New Year with Winnie, Isaac shared what he likes best about Christmas. In a one-word response that said it all, Isaac reached down, hugged Winnie and whispered, “Santa.”

And for right now, in the Schillings’ world, all is calm. All is bright.