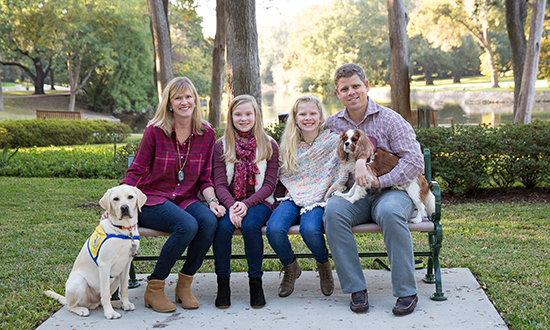 In the spring of 2016, they received Canine Companions puppy Albie. They knew that returning Albie after their time raising him would be difficult, but they believed the chance to change someone’s life would fill the void that the puppy would leave.

They spent the next year and a half with Albie — bonding, loving and growing together — all in hopes that he would go on to serve a bigger purpose. Albie’s matriculation day was an emotional one for their family. There were a lot of tears, but there was a lot of hope, too.

“When he was a young puppy, I liked to whisper in his ear that he was born for amazing things,” says Kelly. “I’d look in those soulful eyes and tell him that again and again.”

Turns out, she was right. This May, Albie graduated as a service dog. He will greatly enhance the independence of the person with whom he was matched by picking up dropped items, opening doors, helping with laundry, and bridging the social gap that a disability sometimes brings.

“Graduation day was a roller coaster of emotions,” says Kelly. “I knew that raising Albie would involve us giving, but I never expected to receive like we did. The Canine Companions community feels like palpable love and acceptance. I wish that kind of experience for every person.”

As Kelly, Kirk, Katherine and Killian watched Albie go home that day, they became a part of someone’s journey. Now, the journey will begin again with the addition of an 8-week-old puppy named Penelope. While this journey will be just as bittersweet, the family has a new outlook.

“Now we realize that you’re not really giving the puppy up,” explains Kelly and Kirk. “You are sharing time with them and helping define their future.”