Home » About » Stories » No Excuse for Being Late to Class

No Excuse for Being Late to Class 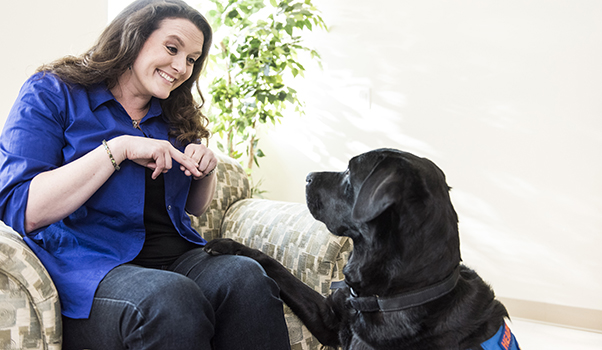 Dr. Cara Miller has a very persistent alarm clock. It doesn’t have a snooze setting, and it often comes with a couple of whiskery kisses. Cara’s alarm clock is named Turf, and he’s a black Labrador and a highly-trained hearing dog from Canine Companions for Independence®.

Cara works as a Professor of Psychology at Gallaudet University, the world’s premier university for students who are deaf or hard of hearing. From her home to the busy campus grounds and commute through Washington, D.C., Turf has an important job — he is tasked with being Cara’s ears.

“Every morning, he alerts to my alarm clock and we have a quick snuggle before breakfast,” Cara states. “This teacher has no excuse for being late to class!”

While Gallaudet has many modifications in place to make the university an accessible environment, with flashing doorbells, video phones and bilingual American Sign Language and English classrooms, Hearing Dog Turf still has a lot to do to help Cara be aware of important sounds in her environment, both at home and at work.

Cara teaches Clinical Psychology doctoral students, including supervising research and clinical practice. In the classroom, Turf always has an eye on the time. When Cara sets a timer to beep at the end of class, Turf lets her know with a nudge that it’s time to wrap up the lecture, a gesture appreciated by her students.

“Whether crossing campus or working in my office, Turf alerts me to the presence of sirens in the vicinity,” says Cara. “He lets me know about items I’ve dropped unknowingly and alerts me when people call my name to let me know they’re looking to get my attention.”

Cara sometimes experiences vertigo and relies on Turf to retrieve items like her keys or wallet. Not only does he alert her that the wallet has fallen, something Cara cannot hear, he also prevents her from losing her balance by delivering her wallet to her. Cara often relies on Turf’s body language to be more aware of her environment. His “attentive listening” lets Cara know about the goings-on in the world around her, whether or not she can see it happening.

Turf is Cara’s successor hearing dog from Canine Companions, and he as well as her first dog, Maya, have had a profound impact on her life. “It used to be that I had to deduce sequences of events from bits and pieces of information,” Cara says. “Seeing the car in front of me pull over on my commute used to be my cue to do the same before I could even see the oncoming ambulance. These days, I’m apt to be the first person to pull over to let emergency vehicles pass, thanks to alerts from Turf. For a deaf person fairly accustomed to being the ‘last to know,’ this awareness is an unexpected pleasure.”