Home » About » Stories » Never Losing a Case With Bear

Never Losing a Case With Bear 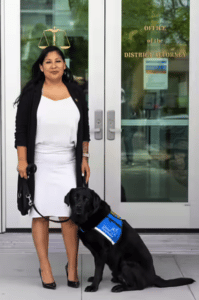 Most people will never have to experience the inside of a courtroom or a forensic interview, reliving extremely traumatic events. Thanks to a very special Canine Companions facility dog named Bear, children at Contra Costa Courthouse in California no longer go through the criminal justice process alone.

Investigator Janet Era uses Bear’s trained tasks to help children open up during interviews by applying deep, calming pressure, doing puzzles and playing games. “Bear’s most important job is getting victims through some of the most uncomfortable times of their lives,” Janet says.

Bear is also specially trained to accompany victims of abuse into the courtroom to testify against those who have hurt them. Working alongside Deputy District Attorney Chris Sansoe, Janet and Bear help children feel safe in a sometimes-terrifying situation. “When I see a child open up with Bear, it feels like we’re really making a difference,” Chris says. “I’ve never lost a case with Bear.”

During a trial, Bear curls invisibly under the witness stand to provide support for children telling their story – sometimes remaining there silently for hours. It’s critical that Bear doesn’t disrupt court proceedings, which can impact the outcome of a case. Occasionally, Bear’s intuition kicks in so powerfully that he is able to go beyond a supportive presence at a child’s feet.

Janet recalls a young woman testifying who experienced a panic attack on the stand. “I heard Bear’s tags jingle,” Janet remembers. “Suddenly, the young woman went from panicking to being okay. She continued to testify. Bear felt the oncoming panic attack and placed his head on her lap.” Without Bear’s calming deep pressure, the trial wouldn’t have been able to continue. “Bear definitely makes an impact.”