Home » About » Stories » Miller and Bahama 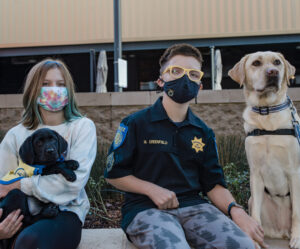 13-year-old Sacramento resident Miller, who has a rare neurodegenerative disease, received Skilled Companion Bahama free of charge last year. Bahama helps Miller be more confident in public, uses her skills to play therapeutic games with him, accompanies him to therapy appointments, hospital stays and more. In Miller’s therapy appointments, Bahama retrieves items from the ground, making therapy so much more fun. Bahama also provides calming deep pressure using her “cover” command, where she lays her body on Miller. After receiving Bahama, Miller knew he wanted to give back to the organization that gave him his best friend and favorite helper.

Miller, who is an honorary Sergeant at the Sacramento Police Department, and his sister Jac, named Canine Companions puppy O’Sully in honor and memory of fallen Officer Tara O’Sullivan, who was killed in the line of duty last year.

Puppy O’Sully is an adorable 2-month-old black Labrador/golden retriever cross who is being raised by a volunteer puppy raiser in Sacramento. She’s already captured the hearts of her puppy raiser, as well as Miller and Jac. O’Sully will surely be a favorite around the Sacramento Police Department and in the Sacramento community while she spends her next 18 months training in Sacramento. We look forward to following puppy O’Sully on her journey to service dog on Instagram @puppyosully.

We’re thrilled that Miller and Bahama make such an amazing team and are extremely grateful to Miller and Jac for selflessly and generously raising money for our mission!