Home » About » Stories » Lifeline and Companionship 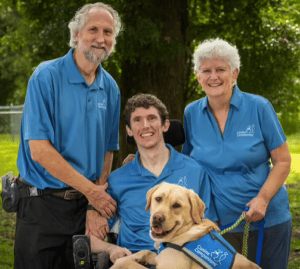 At just 16 years old, Sean Giblin was diagnosed with primary progressive multiple sclerosis (MS), an autoimmune disease that attacks nerves and leads to neurological issues that increase over time. Several years ago, Sean started using a power wheelchair and recognized his symptoms were progressing rapidly.

Sean experiences muscle spasms so severely that he was even thrown from his wheelchair, breaking his hip. This was the moment Sean and his family realized they had made the right decision to apply for a service dog from Canine Companions months prior. “Fortunately, we were home,” recalls Sean’s father, Rob. “We were able to help Sean in this emergency.”

Sean and his parents hoped that a service dog could provide independence and companionship, and help Sean at his job, counseling other people living with MS.

Service Dog Oscar was partnered with Sean in 2022, free of charge, and he would be key to bringing Sean and his family companionship and help. Before receiving Oscar, Sean developed tremors, limiting the use of his hands and arms. Deb and Rob were happy to help Sean work with Oscar as a team, and Oscar is always right by Sean’s side during the workday in his home office.

Sean sees the benefits that Oscar provides, including peace of mind. “If I drop my cellphone, Oscar will pick it up and bring it right to my lap,” Sean says. “I use my cellphone for work. That’s how I do my job. It’s also the way I can reach my parents if I need help.”

Oscar is trained to retrieve Sean’s cellphone using a special tab, delivering his phone directly to where Sean can grab it. Sean and his parents are also working to teach Oscar to go get Deb when Sean needs assistance, especially if he has a fall. With Oscar, Sean doesn’t have to worry about not getting help – Oscar is there.

Service dogs, like Oscar, even go beyond helping with physical tasks, providing support through pain or bad days. Oscar distracts Sean daily from the difficulties he experiences from his MS. “Just looking over at Oscar, Sean gets this boost,” Rob says. Sean loves to give Oscar belly rubs and play fetch. Most importantly, Oscar gets Sean out of the house and meets new people.

“Sean is 32, and he spends most of his time at home with us,” Deb says. “But, Canine Companions and Oscar have opened our world!”