“Over 80% of the kids we serve are victims of child abuse or neglect,” says Facility Dog Mabel’s handler, Sarah, who is the founder of the Phoenix Center in Texas. “Mabel has had countless, powerful interactions with the kids we serve. She is happiest when she is working. Mabel naturally wants to connect and be with the kids as much as possible. She is a special girl.”

The Phoenix Center is a non-profit that provides free and affordable mental health care for children and families in need. Much of the support Mabel provides occurs during therapy sessions, whether she is providing pressure and sensory input, or encouraging communication and providing comfort.

Animal-assisted therapy has been shown to improve symptoms of post-traumatic stress disorder by helping children regulate stress arousal systems, often referred to as the fight, flight or freeze response. Mabel is also a favorite during play therapy where the kids love to dress her up and include her in their sessions.

Assistance dogs also help create a calm- ing and regulating environment that assists children in overcoming the effects of trauma.

One little 7-year-old boy that Mabel helps was born to a parent with substance abuse challenges, and has had a lot of challenges in school. “He ends up in the principal’s office nearly every day and he doesn’t have any friends. He gets a lot of negative attention,” says Sarah. “Having positive interactions and unconditional love from Mabel is incredibly therapeutic for him. He used to be destructive and very unregulated, even at the Phoenix Center. He’d often knock everything off the shelves in the play therapy room. With Mabel in the room, he is a different kid. He is protective and loving towards her, and calm and regulated. He wants Mabel in every session now and is very nurturing with her.” Another child Mabel has helped is an 11-year-old who is on the autism spectrum.

“We’ve had Mabel do a ‘crash’ command, which gave Mabel permission to lay and put her full weight across the boy’s lap, when he was upset and unregulated. This created sensory input, and weighted pressure, which helped calm and ground him,” explains Sarah. “His breathing changed and he even said, ‘Mabel is so peaceful and relaxing. I feel so much better and calm.’”

Already in her short time at the Phoenix Center, Mabel has become a favorite among clients, staff and is even a little bit of a celeb- rity in their small town. “Mabel has already had transformative interactions with the kids,” says Sarah. “She has been an invaluable member of the team. I remember one of our teens telling me, ‘Who needs therapy when you have Mabel?’” 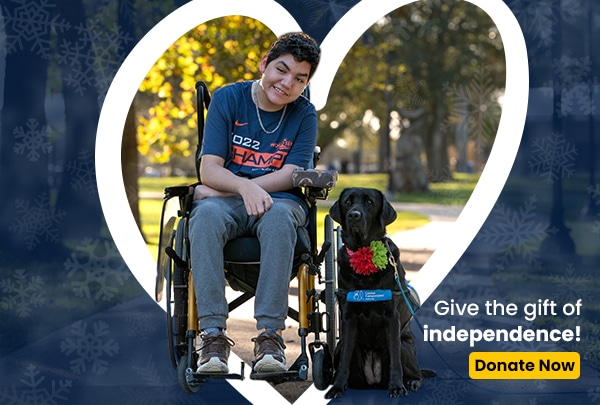