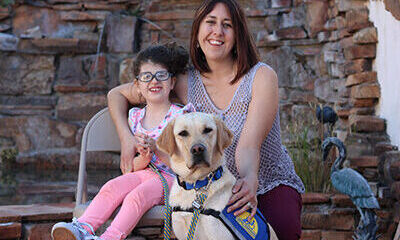 Nicole Guysi asked her daughter, Brooke, how old she is. Brooke picked up her iPad and tapped it a few times before it promptly responded, “Eight.”

Brooke Guysi has been diagnosed with Cohen syndrome, a genetic disorder that causes diminished muscle tone, intellectual disability, communication challenges and other symptoms. Brooke has also been given a second diagnosis of autism.

Despite her challenges, Brooke has grown up to become an independent child who is working toward breaking those barriers she has been given, Nicole said. However, Brooke needed some help to accomplish that.

“Brooke is pretty independent, but there’s things that, because of her condition, are very challenging for her,” Nicole said.

To give Brooke more support, she went through Canine Companions for Independence, a nonprofit organization that breeds, raises and trains assistance dogs for people with disabilities, where she eventually met Zara, a 2-year-old Labrador/golden retriever who became her skilled companion.

Brooke went through a two-week training course at Canine Companion’s Southwest Regional Center in California, where she was matched with Zara.

“He (the trainer) brought her over and immediately Zara was amazing,” Nicole said. “She initiated interaction with Brooke and she pet her for a minute and then went to play with her toys and, instead of turning her back on her, she just laid next to Brooke until she was ready again, and I think from that moment, the trainers knew that they were a match.”