Do You Speak Dog? 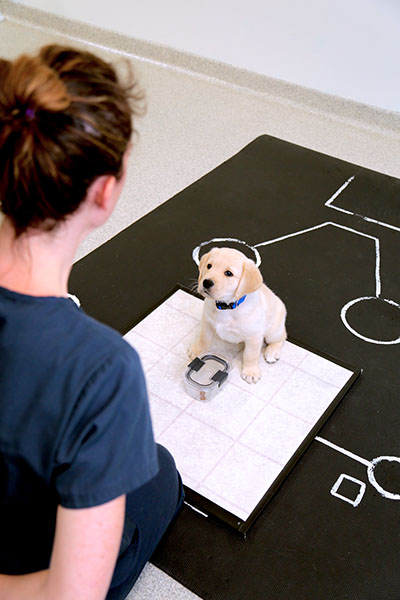 In a groundbreaking study in canine cognition, our partners at the Arizona Canine Cognition Center at the University of Arizona have determined that Canine Companions puppies understand aspects of human communication from just eight weeks old! The results also suggest that a large part of human-canine communication is genetic – at least in Canine Companions’ dogs.

Canine Companions puppies underwent three fun tests – a “pointing test,” a “human interest” test and an “unsolvable” test. In the pointing test, a researcher placed two upside-down cups in front of the puppy, one with a treat underneath and one without. The researchers pointed to the cup with the treat; puppies followed the pointing gesture 70% of the time – similar to the rate of adult dogs.

“The puppies were able to follow the point from the very first exposure and didn’t do better over consecutive trials,” says Dr. Emily Bray, postdoctoral researcher at Canine Companions and the Arizona Canine Cognition Center. “This suggests that the ability to follow gestures is something that they come to the test already prepared to do! We also see that there is a strong genetic component.”

Another test also supported the inherited communication abilities of Canine Companions puppies. Our puppies made eye contact with researchers speaking in a high-pitched voice for an average of six seconds – a key social cue that shows early connection in human-canine communication.

The final test timed how long a puppy would independently try to open a locked container with food visible inside, compared to how much they would look towards a human for help. In adult dogs, this “unsolvable task” usually results in dogs readily looking for human intervention. In puppies, the tendency to look to a human for assistance was not very strong, suggesting that for puppies, the ability to understand social gestures appears sooner than the ability to initiate them.

We’re grateful to our research partners and Canine Companions’ research team for contributing to important research to help us understand our puppies and service dogs. Learn more at canine.org/science.