Home » About » Stories » Dixon Makes All The Difference

Dixon Makes All The Difference 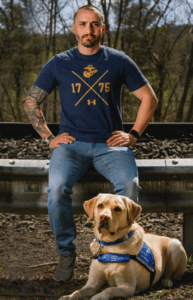 U.S. Marine Roger Rua completed over 100 security patrols as a machine gunner in Afghanistan with the 9th Engineering Support Battalion, Security Platoon. He was 22 years old. On March 29, 2012, he awakened after a night on the road for an early patrol and was injured by an improvised explosive device (IED) within 10 seconds of opening his eyes. “I checked to see if I had all my limbs, realized everything was intact and I wasn’t bleeding out. Then my limbs went limp. That’s when I realized I had a severe spinal cord injury,” he recalls.

Roger was paralyzed from the chest down. After months of rehabilitation at Walter Reed Army Medical Center, he moved his toe. Slowly, Roger not only regained sensation, but movement enough to walk again. It was the abrupt transition from Marine to civilian that became his next challenge.

“The military does a good job preparing you for war,” Roger says. “But no one prepares you for coming back injured or broken.”

“When I met Dixon, he acted like he had been waiting for me to come home for the past two years,” Roger recalls. “We had that immediate bond. I’ll never forget that day.”

Service Dog Dixon is trained in tasks to help with Roger’s symptoms of PTSD, interrupting anxiety attacks and nightmares, and retrieving items Roger can’t reach during flareups of his spine. He shares, “Dixon has helped limit my anxiety and panic attacks to a point where it’s manageable. Thanks to Dixon, I can get out of the house, knowing he’s there to help me physically and mentally.”