Home » About » Stories » A Tale Worth Celebrating

A Tale Worth Celebrating 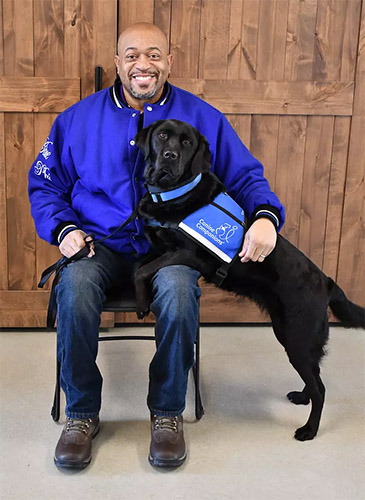 Rodney Sparks served our country in the United States Army for 20 years. He has experienced lasting effects impacting his daily life, including a diagnosis of post-traumatic stress disorder (PTSD).

While the adjustment to civilian life was tough, Rodney found hope through a Canine Companions service dog named Novella, provided to him completely free of charge.

Novella spent two years training for this important role. She is expertly trained in specific tasks to mitigate the symptoms of PTSD including turning on lights, creating a buffer in public, and anxiety and nightmare interruption.

“She does nightmare interruptions,” says Rodney. “If I’m sleeping and start to kick or move, she’ll pull the covers or jump on the bed.”

Novella was specially matched with Rodney in January and has been life changing. Their partnership may have even been fate.

Canine Companions service dogs spend the first year and a half of their lives with a volunteer puppy raiser who helps build an early foundation, providing socialization and basic training.

While Rodney was still in the process of applying for a service dog through Canine Companions, he attended an open house event at our South Central Training Center in Irving, Texas. At the event, he began talking to a local puppy raiser who provided some encouragement.

“She said ‘Hey, I have a young puppy here, and when you’re ready, she’ll probably be ready,’” shares Rodney. “And her name was Novella.”

Over a year later, Rodney could not believe he was meeting Novella a second time, this time as his service dog.