Home » About » Stories » A Christmas Gift of a Lifetime

A Christmas Gift of a Lifetime 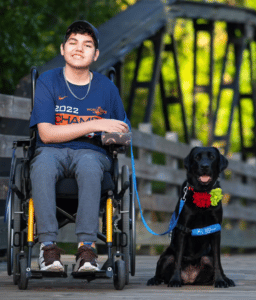 Living with a traumatic brain injury, Londen spends more time than most children in a hospital setting. A special Canine Companions facility dog named Dexter helped him through hard times during his earlier treatments and therapies, which left a lasting impression on him and his family.

“We saw so many benefits for Londen in such a short time. We decided we needed our own ‘Dexter,’” says Londen’s mother, Fabiola.

Londen received Service Dog Numa, just in time for Christmas in 2020 – and what a gift she has been. Expertly trained to increase independence, she helps with daily tasks, like retrieving items and opening doors, as well as participating in therapy sessions to motivate him to reach his clinical goals.

As a result of his disability, Londen will require a lifetime of rehabilitation services, including physical, occupational and speech therapy. “Numa makes Londen feel like they can do this as a team,” Fabiola remarks. She brings companionship and confidence to him – from a difficult therapy session to a hospital visit and even a trip out in public – by being by his side.

“Being that Londen is in a wheelchair, having Numa really boosts his confidence out in public like, ‘look at my dog!’,” his mother shares. “With Numa, we have opened a whole new chapter that is so exciting. It’s a good feeling.”