Home » About » Stories » A Canine Companions Journey: 25 Years and Counting 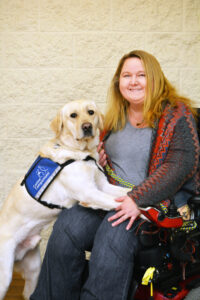 In the mid-1990s, Sharon Heyer, from Minnesota, met a Canine Companions puppy being raised by her middle school’s assistant principal. Sharon, who has muscular dystrophy, begged her mother to apply for a service dog to no avail. At that stage in her life, a service dog didn’t seem like a good fit.
When Christmas rolled around, there was one present under the tree that would change Sharon’s life forever – a single dog bone and a letter of acceptance from Canine Companions. Sharon’s mother had secretly applied for a service dog for her teenage daughter. “To this day, that is the best gift I’ve received in my life,” Sharon says.
In 1996, Sharon was paired with Service Dog Rex, followed by Service Dog Ezra a few years later.
“Ezra escorted me into adulthood,” Sharon recalls. “I graduated from college, got a driver’s license, started student teaching and got married.” When Sharon started teaching full-time, Ezra’s sensitive nature made it clear that he would be happier as Sharon’s loving pet.
Sharon’s third service dog, Keaton, was not only trained in over 45 commands – like opening doors, picking up a dropped cell phone and turning on lights – but he was also an exceptional ice breaker for his typically shy partner. Keaton drew people to Sharon, and as an educator, Sharon was always happy to teach people about Keaton’s job. On his last day of work, over 700 teachers and students lined the halls to honor Keaton’s well-earned retirement. “They recognized the power of his service and the humanity in making the world a better place for someone else.”

Currently, service Dog Roman is providing independence for Sharon 25 years after she received the gift of Rex.

“My journey began with a simple gift of a dog bone, but Canine Companions took that gift and transformed my life.”