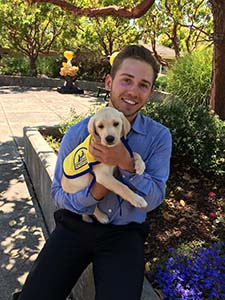 Kyle Weatherman is a renowned ARCA (Automobile Racing Club of America) driver, making his way through the ranks in motorsports on his way to NASCAR. He started racing go-karts at eight years old, ascended into the world of Bandoleros racing at ten years old, and moved up to Legends racing at twelve years old, making him the youngest driver in the Legends circuit at that time. He spent the next three years in Legends, perfecting and honing his craft. In 2013 and 2014, he ran a few races in the ARCA Series. In 2015, he ran enough races to qualify as a full-fledged driver in the ARCA series and was named Rookie of the Year, having also won the Bill France Four Crown Award and the Calypso Lemonade Short-Track Championship. During his time in ARCA, Weatherman has racked up 24 Top Five finishes, 35 Top Ten finishes, and led an impressive total of 756 laps. He is also a 2 time National Champion. Kyle believes that when we help others, we leave a lasting positive impact on mankind.

As Kyle prepares to race on behalf of Canine Companions for Independence, he hopes that people will get in touch with the organization and lend their support. He says, “The folks at Canine Companions are amazing. They provide highly trained dogs to help people live life more fully. It’s a very noble organization and I am proud to be affiliated with them.” To learn more about Kyle visit kyleweatherman.com.