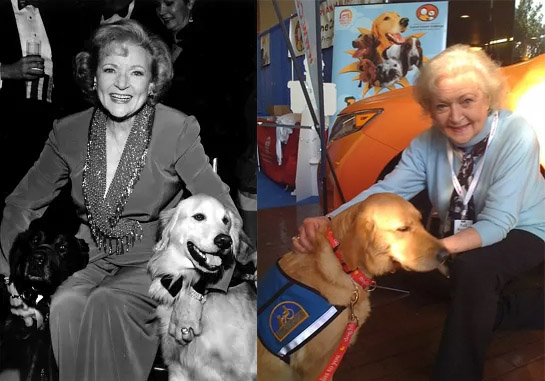 Betty White began her television career in the late 1930s. She starred on “Life with Elizabeth” in the 1950s and maintained her popularity as a TV personality through appearances on talk, game and variety shows.

In the 1980s, following a lengthy run on “The Mary Tyler Moore Show,” Betty co-starred in another popular sitcom with the launch of “The Golden Girls.” Her success carried her into her early 90s. Betty joined the cast of “Hot in Cleveland” in 2010 and later that year was the subject of a successful Facebook-based campaign to host Saturday Night Live, garnering her a Primetime Emmy Award for Outstanding Guest Actress in a Comedy Series.

Betty was a trailblazing animal welfare advocate and pet enthusiast and worked for decades to champion animal rights in her charity work. A passionate supporter of service dogs, Betty promoted the Canine Companions mission by partnering with us at the Heart of a Hero event in 1992 and the subsequent informational video of the same name.

“I’m the luckiest person in the world — my life is divided in absolute half: half animals, half show business,” Betty told TV Guide in 2009.