Home » About » Board & Leadership » National Board Officers 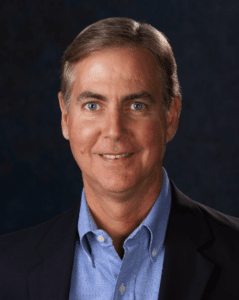 Bill White first became involved with Canine Companions in the mid-1990’s in the Southeast region. He was introduced to our organization by a long-time supporter and puppy raiser, Nancy Baumann, well before there was even a training center in Central Florida to attend the very first gala in the region. He was hooked.

Over the next few years, Bill became regional board president in the Southeast and led the capital campaign that culminated in the opening of the training center in the year 2000.

Since retiring as Treasurer of Darden Restaurants in 2020 after a 31-year career, he has found a renewed capacity to further serve our organization (at least when not carrying the bag for his 7-year-old grandson to international golf tournaments).

“I am continuously amazed at the impact that a single Canine Companions team can have not only on the life of an individual with a disability, but the ripple effect the team can have on all those that come in contact with them,” says Bill.