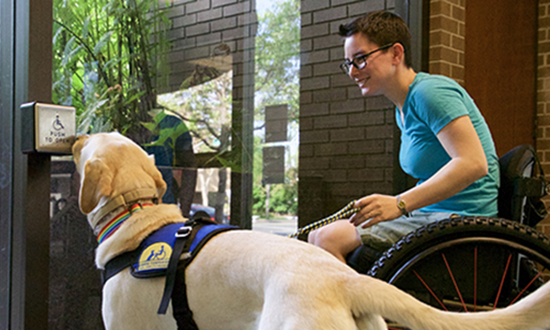 September is National Service Dog Month, and Canine Companions®, the first and largest service dog provider, is asking people to pledge to stand against service dog fraud. “In a recent survey of our graduate teams, 66% reported that a ‘fake,’ questionable or out-of-control service dog had vocalized, interfered with, snapped at or bitten their task-trained service dog,” says Sarah Birman, Canine Companions director of training and client services. “There are a staggering number of dogs in public these days, in stores, on planes and other places pet dog aren’t permitted.”

The pledges in support of protecting independence and eliminating unsafe service dog frauds will show public backing as Canine Companions works with organizations and agencies to make the public safer for people with disabilities through education and training.
“Mork was so fearful of dogs after being attacked eight times in our three years together that he couldn’t work anymore. Recently, I had to make the right choice for Mork and retire him from service at age four,” says Wallis Brozman, a three-time Canine Companions service dog recipient. “It was more than an inconvenience. I lost my independence and my best friend.”

More than 6,200 task-trained service dogs have been placed by Canine Companions since its founding in 1975. Canine Companions has enhanced the lives of veterans, children and adults with disabilities immeasurably. National Service Dog Month is an especially important time to educate the public about the appropriate behaviors and task work of life-changing service dogs.