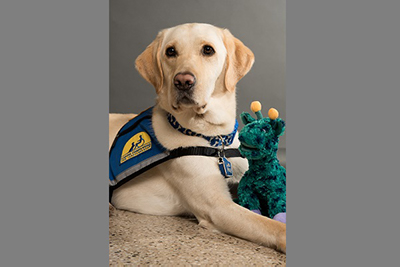 The latest hire at Children’s Memorial Hermann Hospital has all the skills he needs to help young patients: solid training, a strong work ethic, a good bedside manner, a wagging tail and a wet nose.

Dexter, a 2-year-old golden retriever and Labrador mix, is a new facility dog who spends weekdays working at Children’s Memorial Hermann Hospital. He and his handler, Certified Child Life Specialist Christy Lange, work together as partners to help pediatric patients and their families.

Dexter and Lange can be spotted together in the hospital hallways, in the playroom or visiting patients in their rooms. In a hospital setting, catching a glimpse of a dog can spark an unexpected burst of joy. “When I open that door and the child and family see us, smiles just come to their faces,” Lange said.

Dexter has the same training as a service dog, but what he does is quite different. Dexter is not assigned to help a single person get around or accomplish tasks. Instead, he’s working with dozens of patients, helping them each meet very specific treatment goals. In a single day, he might help a youngster do physical therapy, sit with a child to offer comfort, then distract a scared young patient before or during a procedure.

“We’ll use our skill sets together to help that child specifically with what they have going on,” Lange said.

Dexter and Lange see between four and 10 patients a day. They might go from room to room, making individual visits, or they might join a group at the hospital’s indoor park or in the playroom.

A visit from Dexter can help a child feel less afraid of being in the hospital, Lange said. It can open a patient up to talking so that Lange can explain an upcoming procedure.

The dog’s calming presence puts the kids at ease and helps them to open up, she added.

“He’s jumping up on the bed and laying down with that child, and the next thing you know they’re telling me about the accident that brought them to the hospital,” Lange said.

Dexter knows about 40 commands, mostly positioning commands, which ensure he’ll always be exactly where he’s needed. With some kids, Lange might command Dexter to jump onto the bed, but for a more delicate patient, he’ll merely rest his head on the mattress.

While the canine comforts patients and their families, he’s there to help the kids meet their goals, Lange said.

“With just him sitting there, the child is sometimes able to sit up longer, reach toward him, do those repetitive arm movements as they’re petting him and brushing him,” she said. “They’re engaging in that treatment for longer simply because he’s there.”

Recently, Lange and Dexter were working with a young boy in the physical therapy gym. Dexter held a turtle-shaped bean bag in his mouth so the boy could reach out to take it from him. Being able to work with a dog made therapy more fun for the patient and an overall better experience, Lange said.

With another patient – a teenager – doctors were concerned that he wasn’t getting up to walk around enough after surgery. Lange and Dexter visited his room.

“We just knocked on the door and opened it, and he practically jumped up out of bed,” Lange said. Soon, the teen was playing air hockey with Lange and Dexter in the playroom.

Child Life Specialists host a Medical Play Monday each week, where young patients can handle some medical equipment – from stethoscopes to artificial syringes – in order to feel less uneasy about their treatments. Dexter and Lange often stop by to help out.

At a recent session, Lange asked a young patient if she’d be Dexter’s doctor and give him an exam. The girl nodded yes.

“So, Dexter laid down and she grabbed the stethoscope,” Lange said. The tot listened to the dog’s heart, examined his legs and feet, and peered into his ears. Dexter laid there calmly through the whole exam.

“That was giving her that power back,” Lange said, a sense of confidence and control that is so often taken away from kids in a medical situation.

Dexter was trained at Canine Companions for Independence®, a national non-profit organization that trains assistance dogs. Dexter’s background has prepared him for his new job at Children’s Memorial Hermann Hospital. Since puppyhood, he has been prepared for work in a hospital setting. But he goes home with Lange at night, and “when we go home, he’s all dog,” she said.

In his off-duty hours, Dexter relaxes in the patio sunshine, takes naps everywhere and loves to run circles around the living room with his crinkle or squeaky toys.

Memorial Hermann employees have been asked to treat Dexter like a colleague, not a dog. No petting, scratching or treats are allowed – nothing that could distract him from his work.

“I’ve been very appreciative of how respectful the staff has been, knowing that we’re working,” Lange said. But she knows her colleagues, just like the patients, are delighted when they see a dog at the hospital.

As a facility dog, “Dexter absolutely breaks barriers,” Lange said. “What he offers is that unconditional love, really. It just instantly puts people at ease and brings those smiles. It’s an invitation, then, for me to come in and go from there.”