Home » News » Duke University Admits Puppies for the Class of 2019

Duke University Admits Puppies for the Class of 2019 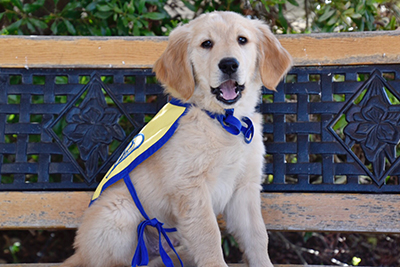 Durham, NC..This fall, Duke University will be admitting students with four legs instead of two. In the first program of its kind, the Duke Canine Cognition Center will welcome seven puppies from Canine Companions for Independence® (Canine Companions,) the leading assistance dog non-profit in the United States. The puppies are part of a study funded by the National Institute of Health (NIH) to assess the impact of different rearing strategies on the behavior and cognitive development of assistance dogs.

Canine Companions assistance dogs are trained to assist children and adults with a range of physical and developmental disabilities that leads to greater independence and confidence. The dogs at Canine Companions are trained to perform a variety of tasks like opening doors, turning on lights, picking up objects that are dropped and out of reach, and alerting their partners to key sounds. “

Becoming an assistance dog is like going to college,’ says Professor Brian Hare, from Duke’s Center of Cognitive Neuroscience and director of the Duke Canine Cognition Center. ‘It’s tough to get in and not everyone graduates. The goal of the project is to increase the supply of assistance dogs and to see more dogs graduate and serve more people. To do that we need to understand what experiences they need early in life to be successful?’ “

We want to identify those features that are going to be linked to success,” said Brenda Kennedy, DVM, MS, Canine Companions national director of canine health and research. “We are honored to work with the Duke Canine Cognition Center. This will help us make decisions at an earlier point which means we can place more assistance dogs and help more people with disabilities.”

More than a hundred Duke undergraduates are needed to help raise the puppies from 10-20 weeks of age. The students will also run the puppies through a range of cognitive games that will function as a kind of early aptitude testing, which will be used in the future as early identifiers of puppies who are most likely to graduate as assistance dogs. The program just completed its year-long pilot phase before being awarded NIH funds for the five-year study. During the pilot study more than 100 students were chosen to help and they all reported that being a volunteer puppy raiser had a positive effect on their mental well-being.

Following the success of the puppies with the Duke students Hare is hoping to bring the program to the wider community in the Durham area, calling for volunteers to raise Canine Companions puppies in their homes and bring them into Duke every other week. “We’ll host the on-campus puppies, but we need lots of volunteers in the community to host off campus puppies. One of the objectives of the study is to compare the impact of different rearing methods on cognition during the period most critical to brain development of 8-20 weeks,” said Hare.

About The Duke Canine Cognition Center The Duke Canine Cognition Center (DCCC) is dedicated to the study of dog psychology. Their goal is to understand the flexibility and limitations of dog cognition and gaining a window into the mind of animals as well as the evolution of our own species. They also apply this knowledge of dog cognition to improve programs in which dogs are bred and trained to help humans. ###

*Please be aware that by clicking these links you are visiting websites that are not managed by Canine Companions. Website security, accessibility and privacy policies may be different than Canine Companions policies. Please read their policies closely.