Dogs who serve: how K-9’s can change lives 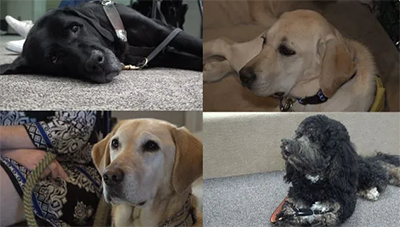 Click here to see the original article by FOX 34 KJTV.

Dogs are a part of our society. For many they bring unity and joy, but they can also do much more. People with disabilities or even those seeking comfort, turn to canines.

For three years, Pablo has been at Chelsey Price’s side. Chelsey lost her legs to an infection in 2010, forcing her into an entirely new chapter in her life.

“I always thought it’d be awesome to have a working dog, never thought I’d be in that position to get one,” Price said.

She waited about two years after losing her legs to apply for a guide dog. Price was then matched up with the service dog free of charge through Canine Companions.

Pablo has given her the confidence to go back to school, pursue a career, and live independently.

“He helps me pull the laundry basket, he helps me open freezer doors, he helps me bring my groceries from the car so I don’t have to make like 10 trips back and forth,” Price said.

A few years younger, Leanne, a 6-month-old puppy is in training. Trainer Julie Wilson volunteers at the agency. Leanne is the second puppy she has raised.

“Raisers train the first 30 commands and Canine Companions has them split up in terms of what we work on from two to six months,” Wilson said. “Six to 10 months, and then 10 months to what they call turn in.”

While it is not easy, Wilson believes wholeheartedly, it is worth it.

“I’m not giving up, I’m giving to,”Wilson said. “And you meet people like Chelsey and you meet the people who receive the dogs and you see what those dogs do for their lives, it softens the blow.”

Both Price and Wilson are opening up a local chapter for Canine Companions to help recruit volunteers.

Across town, Vale knows the Texas Tech campus as well as any Red Raider.

“We are definitely partners,” Owner George Stern said. “We have been together in some pretty tight, pretty stressful environments for seven years.”

Stern lost his vision to eye cancer when he was only two-years-old. Just a few years later, he started to go deaf. He has been wearing hearing aids since.

“With a dog, I’m kind of moving in a very swift, very concentrated bubble,” Stern said.

Stern said after realizing the dangers of crossing roads and dealing with traffic, he applied for a guide dog from The Seeing Eye, a dog school based out of New Jersey.

“He increased my independence, my love of travel certainty benefited from him,” Stern said.

Their partnership is really about working together. Stern said there have been plenty of times neither could get to the destination, but at the end of the day, it has only made them stronger.

“We’ve gotten through by simply being able to wake up another day and try again,” Stern said.

Justice and The Lubbock Police Department

You can find Justice at the Lubbock Police Headquarters.

“We’ve really noticed since we had her she’s been great, not just in the community but even my own department,” Sergeant Steven Bergen said.

The Bernese mountain dog, poodle mix is on her way to becoming a certified therapy dog. Bergen’s daughter suggested the idea. To his surprise, other departments across the country had already adopted.

“Dogs release endorphins if that’s something you enjoy,” Bergen said.

Through a partnership with Texas Tech, Justice has been hard at working training and it is already paying off.

“Once she started walking the halls, these strong, tough swat guys breaking down like little kids,” Bergen said.

Bergen said the department may look into training her for more specific services, but for now, She is certainly providing comfort both in and outside the station.