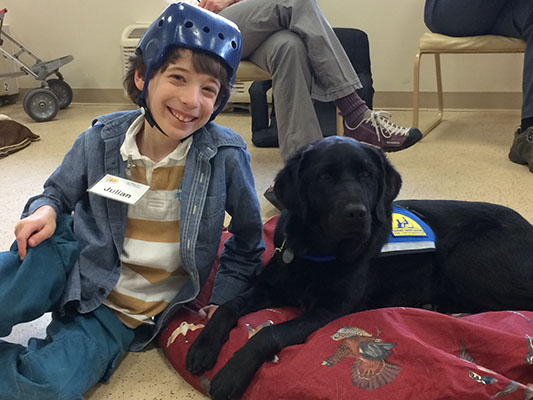 Julian Senick Kaimann, who has cerebral palsy, arrives at school each day thanks to Gemini, a specially trained black lab-golden retriever mix with a can-do spirit. Gemini retrieves 12-year-old Julian’s braces and helps him dress. Once Julian is ready to go, Gemini carries his heavy book bag to the curb, where it is loaded onto the school bus.

“Gemini has made a tremendous difference in our son’s life,” says Julian’s mother, Jennifer Senick, executive director of the Center for Green Building of the Edward J. Bloustein School of Planning and Public Policy at Rutgers-New Brunswick.

Julian’s self-confidence has increased since the family acquired Gemini last May, she says. The dog helps him master motor planning, a skill that most people don’t think about. Before Julian gets up from a chair or goes through a doorway, he decides what he wants Gemini to do, then coordinates his movements with the dog.

“Gemini makes me feel like a regular kid,” says Julian. “She gives me licks and lets me pet her. But she also is a hard worker who helps me walk and encourages me to keep trying when I feel discouraged.”

Trained on Long Island at the Northeast Regional Training Center of California-based Canine Companions for Independence, California-bred Gemini is now “a Jersey girl” all the way, says Senick. “She and Julian have walked the boardwalk of Asbury Park, ridden New Jersey Transit, and attended shows at the State Theatre in New Brunswick.”

An increasing number of Americans have teamed with assistance dogs like Gemini since Congress passed the 1990 Americans with Disabilities Act (ADA) prohibiting discrimination in employment, housing and public access.

About 56.7 million Americans—19 percent of the population—have a disability, according to the 2010 U.S. Census. More than half report a severe disability: About 2 million are blind and another 1.1 million deaf. About 15.5 million have difficulty preparing meals, placing telephone calls or handling other routine activities. In many cases, an assistance animal can help.
New Jersey has long been at the forefront of the assistance-dog movement, thanks to Morristown-based The Seeing Eye, the world’s first guide-dog organization. A blind man, Morris Frank, founded The Seeing Eye in Tennessee in 1929. The organization moved to the Garden State in 1931.

New Jersey’s “cooler weather and varied traffic patterns are ideal for preparing guide dogs for urban as well as rural settings,” explains Peggy Gibbon, the foundation’s director of canine development. The nonprofit has trained more than 17,000 guide dogs for visually impaired Americans and Canadians as young as 16.

At Merlin’s Kids, a nonprofit in Midland Park that relies solely on direct donations, rescued dogs are rehabilitated and trained as service animals for children on the autism spectrum or with other special needs, as well as veterans.

“Dogs have sensitive noses,” says Merlin’s Kids founder and executive director Janice Wolfe. For example, she says, “I train them to recognize the scents that a person with diabetes releases when blood sugar is too high or too low.”

In such cases, a dog can be taught to nudge the person as a reminder to eat something or take other steps to avert a seizure. The dogs can also be trained to alert other people, retrieve telephones and, in some cases, use a special device to notify 911.

Similarly, Wolfe has trained dogs to recognize increases in the stress hormones of children with autism, who experience meltdowns because of sensory overload, unexpected changes in routines or other triggers. Instead of running away, the child is guided by the dog to a safe, calm place. 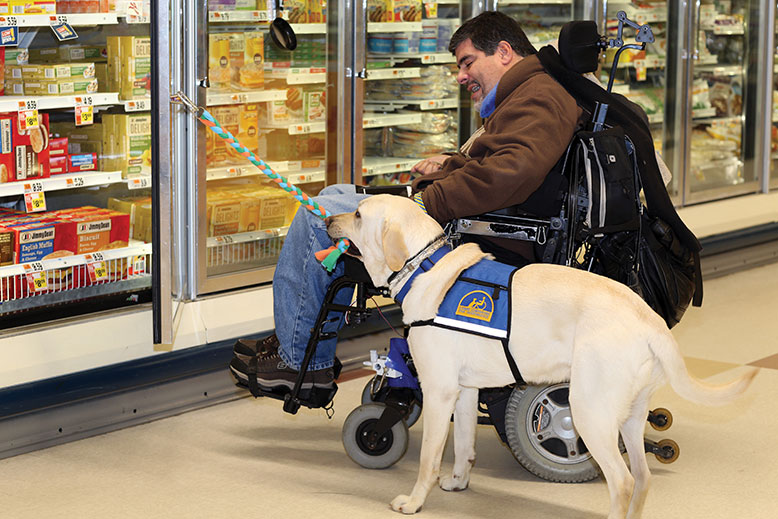 Javier Robles gets an assist from his service dog, Delbert.

The dogs can also intervene with an autistic child who flaps his or her arms, becomes fixated on objects or engages in other behaviors that prevent the child from learning and socializing.

“Matching a dog and its owner is like finding the ideal mate and then developing a loving relationship,” says Leanne Back, of Cherry Hill. She credits Toby, a Cavalier King Charles spaniel, for turning around her 18-year-old son Hunter’s life. Hunter, who has Asperger’s, a form of autism, lived for a period in a therapeutic community because the family could not manage his outbursts. (Leanne Back is wheelchair bound because of an accident, her husband has diabetes, and her daughter has impaired vision and depression.)

Hunter moved back home in 2011, and life improved considerably after Toby, who completed a three-year training program at Merlin’s Kids, joined the family. “At the first sign of agitation,” says Back, “Toby will jump on Hunter’s knee, apply physical pressure to another part of Hunter’s body, or even roll around on the floor with Hunter. At other times, Toby is Hunter’s loyal sidekick, ensuring that Hunter can accompany our family at religious services, trips to Disney World and other social events.”

Javier Robles has enjoyed the companionship of an assistance dog since 1991. Robles, who suffered a spinal injury when he fell out of a tree at age 16, has worked with three dogs trained by Canine Companions for Independence. Now 52, he lives with his wife in Edison. Robles is one of about 200 members of the Garden State chapter of Canine Companions, the largest provider of assistance dogs worldwide.

“The dogs are taught 50 basic commands, which are adapted as the life circumstances of the person and dog change,” says Robles, who, after his injury, earned a bachelor’s degree in sociology from Rutgers-New Brunswick and a law degree from Seton Hall University. “As a quadriplegic, I never would have been able to travel by train or get around Seton Hall without Tess. When she died, her successor enabled me to raise our son and daughter, serve as the deputy director of the New Jersey Division of Disability Services, and pursue my hobby as a beekeeper.”

Now Delbert, Robles’s third dog, is the unofficial teaching assistant of the course he teaches in sports science at Rutgers University for students who are planning careers in the health professions. The mild-mannered yellow lab opens doors, adjusts lights and delivers homework assignments, enabling Robles to concentrate on his lectures and students’ questions.
“But Delbert’s most important contribution,” says Robles, “is showing students that assistance dogs make it possible for people with disabilities to achieve their dreams.”