Canine Companions for Independence® Announces 2019 Volunteer of the Year 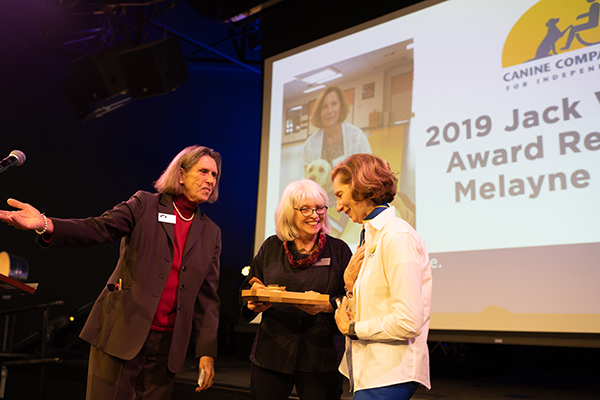 Los Angeles County resident Melayne Yocum’s passion and commitment to Canine Companions was born in 2009. She attended an outreach event and met a puppy whose behavior impressed her and her husband so much, they committed to raising their first puppy, Wilona, the following year.

Yocum wears many hats in her life. She is an operational and financial consultant in the healthcare industry, a wife, a mother of two daughters and a volunteer puppy raiser. Although she has her plate full, she also finds the time to serve as the California Dreamin’ Volunteer Chapter president.

Yocum was able to grow the chapter and establish it as one of the largest and most engaged in the Southwest Region. She also served as the event chair for DogFest Orange County in 2019 and was instrumental in our partnership with the California Science Center for their exhibit ‘Dogs! A Science Tail’, exposing Canine Companions to new audiences within the Orange County and Los Angeles communities. These two areas of responsibility took incredible coordination, organization, delegation and planning. These essential leadership skills help Yocum create amazing momentum within her chapter and DogFest committees.

“This organization has brought so much joy into my life, and by association to everyone that I encounter with these wonderful puppies,” said Yocum.

Yocum’s story with Canine Companions began with puppy raising and her legacy continues as she awaits the arrival of the seventh puppy! Three of the puppies she raised have graduated and are changing lives on a daily basis.

About the Jack Warnock National Volunteer of the Year Award

About Canine Companions for Independence

Canine Companions for Independence is a nonprofit organization that provides expertly trained assistance dogs to children, adults and veterans with disabilities at no charge. Established in 1975, Canine Companions has six regional training centers across the country and is recognized worldwide for the excellence of its dogs and the quality and longevity of the matches it makes between dogs and people. For more information, visit canine.org or call 1-800-572-BARK.